Coffee exports from India fell 7.5 percent to 79,021 tones in October-January on lower stocks and rising local demand. Arrivals from the new crop in coming  month is expected to stem the fall, though. In value terms, the exports has risen to $243.05 million from $218.91 million a year ago, the International Coffee Organization{I.C.O} said in a statement.

The said quarter is also the first quarter of a coffee year that runs from October to September. Following a fall in exports in the first month of the current crop year, global shipments of coffee has witnessed a marginal rise in November. However, world coffee exports has fallen marginally to 9.14 million bags in December 2011 from 9.20 million bags in the year-ago period. While, coffee exports in November 2011 rose marginally to 7.78 million bags from 7.75 million bags in the same period of the previous year, shipments of the brew had declined by 9 per cent to 7.11 million bags in October 2011 as against 7.79 million bags in October of the 2010. The global body on coffee has also revised its production estimate for the brew in the 2011-12 coffee year. According to the ICO, coffee production could be affected in the 2011-12 crop year due to adverse weather. 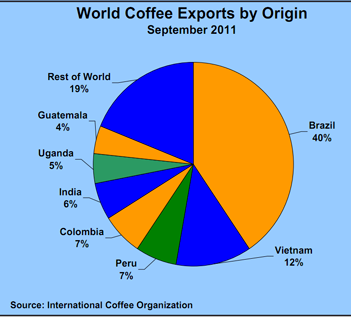 A special mention should be given to coffee exports from Brazil, world's largest coffee producer and shipper has also met with a downfall of  25 percent in January from a year earlier, Brazil's Trade Ministry said. Shipments has dropped to 1.95 million bags from 2.59 million bags a year ago. A bag of coffee weighs 60 kilograms (132 pounds). The average export price was $286.50 a bag last month, up from $217.50 a year ago.

However, in the near future the expectations are numerous like there may an increase in coffee consumption but decrease in production whereas some say that the coffee production in Brazil may increase in 2012-3013. Moreover some are of the opinion that there are chances of a hike in coffee prices [about 4%] and many more.

MOST READ
• India-UAE Partnership - An I..
• IP Accounting
• Higher Education System in I..
• Money in Swiss banks, but wh..
• Greece Debt Crisis